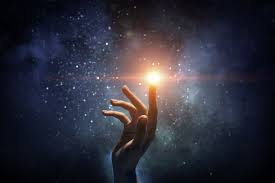 Within the Twelve Steps of Overeaters Anonymous, the word “God” appears three times – for the first time in Step Three, and then again in Steps Five and Six. And although the appearance of this word should not be surprising given that Overeaters Anonymous is a spiritual program, it is the one word which tends to cause the greatest trouble for people new to the rooms of Twelve Step recovery.

The word “God” conjures up many diverse images and wide-ranging ideologies. Used as it is within the Twelve Steps of Overeaters Anonymous, as a member that initially struggled with the word, I wanted to share with you what was shared so freely with me about its intended meaning.

While there may be those among you who grew up believing in a God, or deity, as defined by your religious teachings or childhood upbringing, the use of the word in the OA program is intended solely as a placeholder for “a power greater than ourselves.” Alternatively, this “God” may be referred to as your “Higher Power” – and it may also be called by any name that you might choose to use for the power greater than yourself that lifts your obsession to eat compulsively and that restores you to sanity.

For some of us, the first “God” that we may ever come to know is the “Gift Of Desperation” – G.O.D. Typically, this is the “God” that draws us into the rooms of recovery given that all else has failed, and the feeling of hopelessness seems overwhelming.

For others, it might be the “God” of their childhood – a notion that was provided or defined by a particular religion or belief system to which our parents, or other family members, subscribed.

I was encouraged to understand that within the rooms of OA, “God” is the “God” of your own choosing, and not something defined by any one religion, or any particular faith practice. Rather, this “God” is whatever you choose to make of it. It is entirely defined by you – as in Grant Own Definition, G.O.D.

If you happen to be an atheist, or an uncertain agnostic, you need not be concerned with the word “God.” Many of us worried that we might not recover if we didn’t entirely subscribe to the Higher Power that others chose to call “God.” This was definitely NOT the case.

Rather, each of us is free to choose the “God” of our own understanding – however our understanding might choose to define that “God.” We also didn’t need to adopt that singular name for our Higher Power. We were free to call our “God” absolutely anything we saw fit to call it, so long as what we chose for our ”God” was something greater than ourselves, and, most assuredly, not us!

What Makes OA a Spiritual Program?

Ours is a spiritual program – but NOT a religious one, although there are many within our rooms of recovery that do practice a particular religion or that belong to a particular faith community – this is entirely voluntary, and not a requirement for membership. The only requirement for membership in Overeaters Anonymous is a desire to quit eating compulsively (refer to Tradition Three for further details). What is meant when it is stated that OA is a “spiritual program?” As I understand it, we work the Twelve Steps for the express purpose of achieving a personality change sufficient to bring about recovery from our disease of compulsive eating (this is paraphrased from the Big Book of Alcoholics Anonymous, page 567, our textbook for Twelve Step recovery). This personality change is sometimes called a psychic change, or spiritual awakening. It is as a result of this awakening that we are now able to do (feel and believe) that which we could not do (feel or believe) before on our own unaided will, strength, and resources alone: we recover!

Those who do choose to call their Higher Power, “God,” as defined by their particular religion or faith practice, are entirely free to do so. Equally free is the person that choses a Higher Power that is not one of the recognized deities from the world of religion, but rather a Spirit of the Universe, if you will, or the Great OutDoors, Good Orderly Direction, Gift Of Divinity or even the Grand Organizing Design – which is my personal favorite.

No matter how you slice it, the name “God” in the Twelve Steps can mean very different things to each and every individual person. The key here is that you get to choose both what “it” is, and what you choose to call it. In OA, we are only asked to keep our minds open to the possibility that there is something greater than ourselves that can aid us in our recovery from compulsive eating.

Within the rooms of OA, exists a highly diverse group of people representing nearly every religion and every faith practice, along with people that self-identify as atheist, agnostic, and even some that are simply “uncertain” of where they might fall. All are treated respectfully and lovingly, with none above, nor below, any other.

In OA, all are treated as equals who share a common malady and a common solution to the problem of compulsive eating. While that solution happens to be identified as a spiritual one, anyone may find it by working the Twelve Steps.

By Francine in Willow Glen

JOURNAL PROMPT
What is your concept of a Higher Power/God, and how has this power worked in your recovery?

Please send your experiences with seeking a Higher Power/God to blog@oasv.org. We look forward to hearing from you and to sharing your story of experience, strength, and hope with others on this amazing journey of OA recovery from compulsive eating through the Twelve Steps.